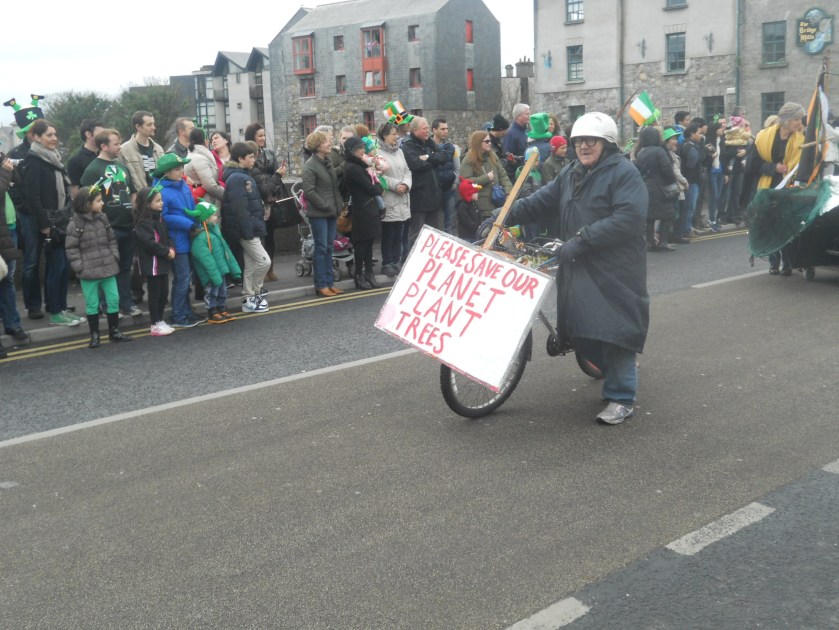 I had my first St Patrick’s Day parade in Galway today and watched various groups fly banners and play tin whistles over the bridge.
It was a good day.
Particularly impressive was one of the marching bands playing ‘Eye of the Tiger’. I was imagining a day in Belfast when  ‘Look for the Bear Necessities’ was played instead of some of those sectarian marching songs.
I also liked this lone gentleman pleading for more trees to be planted.

This last group in particle had me thinking and now that I’m thinking I’m pissed off by our hypocrisy. Edna Kenny was over in the US for the St Patrick’s celebrations pleading the case for the 55,000 undocumented Irish who want to contribute to the US economy, pay taxes and live freely in the land of the free.

Meanwhile there are refugees and asylum seekers who  have suffered and had to flee from life threatening situations in places like Nigeria, Rwanda, Congo who want to do the same here in Ireland, to contribute to the Irish economy and that sort of thing but instead they are locked up in direct provision accommodation for years on end, not being able to cook their own meals, leaving children behind and suffering racism here.