I’ve been pondering what it means to an artist this week. 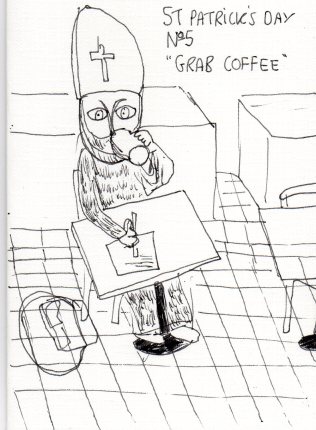 First up, personally I don’t really like the term ‘artist’. When I got married I was about to put ‘B&Q Customer Adviser’ ‘ down on my marriage certificate and my minister said ‘Put down artist’.
Well I did put down artist because during those days of getting married I did as I was told. He could have said ‘Put down pole dancer‘ or ‘Put down King of Sweden‘ and I would have.

So that’s what my profession is according to my  marriage certificate. But clearly I’m not an artist artist. The last time I studied art was third year at Cookstown High School at which point (and thanks to not saying what I’d really like to do and being guided by my well meaning parents saying ‘Well there’s probably more jobs in science) I ended up going down the science route, biology, chemistry and physics for A-Level and a degree (just about) in Environmental Chemistry.

There is no point regretting my decision, you make your calls and roll with them. But sometimes I do I guess.
I regret my decision when I don’t have the skill to draw what I see or what’s in my head or don’t have the craft to carry out something with finesse.

Some people have said ‘Well why don’t you go back and study art?’ but it just seems like a daft thing to do. Thousands and thousands of pounds to study something that will most likely never allow me to make a living and debt for years to come?No thanks.

It is hard though because I feel the need to create and make stuff deep in my bones, because it’s often easier for me than using words. That doesn’t mean that it’s easier for other people to understand me of course, just I find words and speaking hard sometimes. It doesn’t allow me time to reflect or ponder, which is also why I like blogging I guess. I’m allowed the reflection time that quick fire conversation doesn’t allow me.

I guess I was thinking about this in relation to how much you should promote or ‘push’ the stuff you make.  There is a gift like aspect to art but if you push it too much you can turn it into a commodity or  something a bit lacking in relationship.

‘The Gift‘  is a book which I’ve tried to read a few times, but it just bores me into giving up a few chapters in.  But these words sort of get to heart of what I’ve been pondering.

‘every modern artist who has chosen to labor with a gift must sooner or later wonder how he or she is to survive in a society dominated by market exchange. And if the fruits of a gift are gifts themselves, how is the artist to nourish himself, spiritually as well as materially, in an age whose values are market values and whose commerce consists almost exclusively in the purchase and sale of commodities’

I guess it’s that idea of how you can demonstrate gift and grace in a society like ours which is dominated by competition or trying to win the race for survival against your competitors or neighbours. I find that idea of ompetition hard.
For me, art should have a unique, gift like dimension to it but it feels like most of our culture and society is trying to crush that ideal out, especially with the recession. With the recession people seem to be trying even harder to compete and make a living as they don’t (understandably) want to be the losers.

I’ve been trying to make cards this week, they’re not masterpieces of Western art by any stretch of the imagination (far, far from it) but they are hand made and I try to make them funny or a bit different. To give myself a fair price for making them I might have to charge a few pounds extra to something out of Clinton Cards.

Yet to sell the cards to someone who doesn’t feel sorry for me I immediately feel like I have to compete on price with other people. Something of the gift idea is lost and is replaced by competing which I hate. I don’t want to compete with other people yet it’s so easy to do and there almost seems like no escape from it.

This gets me down. I’m not sure why.