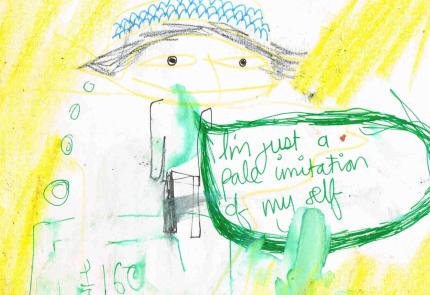 It’s one of those strange ones.

I’ll admit I do like it when some people read a blog post,
or listen to a song I’ve written and say they enjoyed it,
or buy something I’ve doodled
but
the moment I feel that there is an audience gathering (no matter how small that audience is or even if there is no audience at all and ‘the audience’ is only in your imagination) I start to freeze up and not know what to do.

There is definately something liberating in being able to do your thing in obscurity but at the same time it can deeply discouraging. Perhaps it’s just a paradox?

Robert Hughes writes a bit about this sort of thing in ‘The Shock of the New’ when describing how Picasso and Braque came up with Cubism. I’m not saying I’m Northern Ireland’s answer to Pablo Picasso by the way, just that the fact nobody is reading your blog or listening to you allow you freedom to experiment a bit and say things that you would never get away with if you had an audience.

‘But he [Picasso] was so little known, and Braque so wholly unknown, that in the public eye neither artist existed. The audience for their work might have been a dozen people….This might seem like crushing isolation, but it meant that they were free, as researchers in some very obscure area of science are free. Nobody cared enough to interfere. Their work had no role as public speech, and so there was no public pressure on it to conform. This was fortunate, since they were engaged in a project which would presently seem, from the point of view of normal description, quite crazy’
Robert Hughes, The Shock of the New